The French NGO Expédition 7eContinent, is preparing its two main engagements for 2019, under the leadership of its director, the explorer Patrick Deixonne, and its chairman François Lambert.

The NGO is preparing the Atlantys mission on board 7eContinent, its flagship schooner which is currently berthed in the city of Sète, South of France. This mission – a genuine scientific expedition – will start in October and bring a scientist crew into the South Atlantic oceanic gyre, an area of high concentration of micro and nano plastics.

The schooner 7eContinentwill be equipped with a laboratory allowing to handle the samplings in optimal conditions.

The samplings will be collected in accordance with a complex scheme aiming at mapping plastification in the whole gyre and water column. They will be analyzed later ashore. The scientists in the task force come from a dozen laboratories – among which the CNRS  (French National Center of Scientific Research) – and they are specialized in various fields (Chemistry, Biology, Oceanography, Physics).

This mission is consistent with the NGO’s former expeditions allowing to produce innovative results published in scientific articles, which demonstrated in particular the presence of heavy metals in the samplings collected in the North Atlantic gyre (2015 expedition).

This is the purpose of Expédition 7eContinent: understanding the impacts of plastic pollution on the balance of marine ecosystems and on human health. Expédition 7èmeContinent’s scientific expeditions contribute to advance global knowledge and understanding of oceans’ plastification.

In the past 10 years, Educational Tours were systematically organized together with the scientific expeditions led by the NGO in oceans, in order to raise public awareness about the issues of plastic pollution and the “cycle of plastic”, from the earth to the sea and vice versa.

In 2019 the Educational Tour will precede the scientific expedition. In June and July, the schooner 7eContinent will sail along the French Atlantic Coast, from Bayonne to Brest. The program is under construction, with many stops allowing to meet as many people as possible. 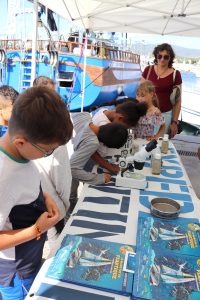